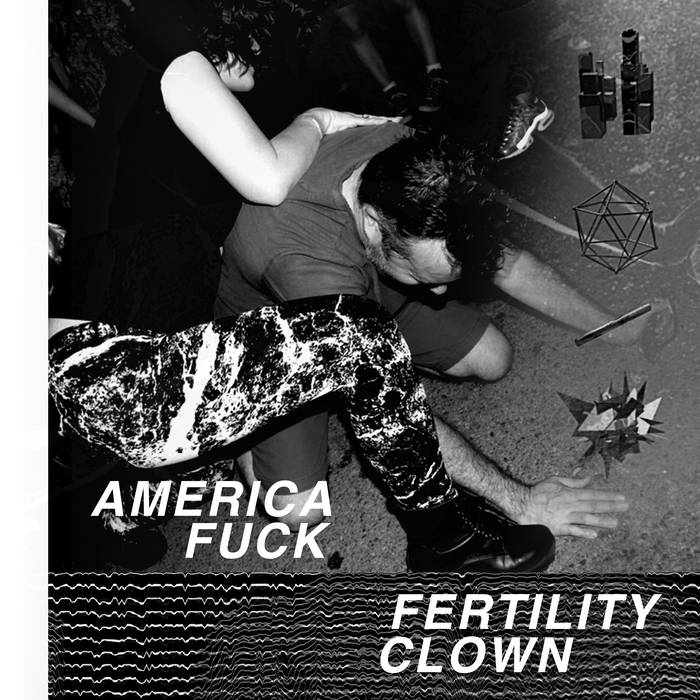 Andrea Speed This is the kind of noise rock I love. I can't explain it in any respect. But I love the whole album. Favorite track: deathbombarc.com/AF2.

America Fuck is the product of living with toxic politics as the foreground; attempting to complete life's menial tasks while filled with both rage and despair. 'Fertility Clown' calls upon the brash immediacy of 80s political punk, the swirling disembodiment of free jazz, shoegaze's resonate escapism, and the grim despair of goth to create a set of emotional tones that simultaneously are cooperative and combative.

FULL SONG TITLES (urls just point to actual song titles):
1.  “…we begin with an infinite debt to something called "society." It's this debt to society that we project onto the gods. It's this same debt that then gets taken up by kings and national governments. What makes the concept of society so deceptive is that we assume the world is organized into a series of compact, modular units called "societies, " and that all people know which one they're in. Historically, this is very rarely the case. Imagine I am a Christian Armenia!) merchant living under the reign of Genghis Khan. What is "society" for me?... Historically, kingdoms and empires have rarely been the most important reference points in peoples' lives. Kingdoms rise and fall; they also strengthen and weaken; governments may make their presence known in people's lives quite sporadically, and many people in history were never entirely clear whose government they were actually in.”

2. “Since one cannot know a radically better world is not possible, are we not betraying everyone by insisting on continuing to justify, and reproduce, the mess we have today? And anyway, even if we’re wrong, we might well get a lot closer. against anti-utopianism (another tiny manifesto): Here of course one has to deal with the inevitable objection: that utopianism has lead to unmitigated horror, as Stalinists, Maoists, and other idealists tried to carve society into impossible shapes, killing millions in the process. This argument belies a fundamental misconception: that imagining better worlds was itself the problem.”

3. “Marcel Mauss believed socialism could never be built by state fiat but only gradually, from below, that it was possible to begin building a new society based on mutual aid and self-organization “in the shell of the old”; he felt that existing popular practices provided the basis both for a moral critique of capitalism and possible glimpses of what that future society would be like. All of these are classic anarchist positions. Still, he did not consider himself an anarchist. In fact, he never had anything good to say about them.”

4. “By the end of his life, Mauss became convinced even Hitler’s great ritual pageants, torch-lit parades with their chants of “Seig Heil!,” were really inspired by accounts he and his uncle had written about totemic rituals of Australian aborigines. “When we were describing how ritual can create social solidarity, of submerging the individual in the mass,” he complained, “it never occurred to us that anyone would apply such techniques in the modern day!” (In fact, Mauss was mistaken. Modern research has shown Nuremberg rallies were actually inspired by Harvard pep rallies. But this is another story.) The outbreak of war destroyed Mauss, who had never completely recovered from losing most of his closest friends in the First World War. When the Nazis took Paris he refused to flee, but sat in his office every day with a pistol in his desk, waiting for the Gestapo to arrive. They never did, but the terror, and weight of his feelings of historical complicity, finally shattered his sanity.”

5. “Before Mauss, the universal assumption had been that economies without money or markets had operated by means of “barter”; they were trying to engage in market behavior (acquire useful goods and services at the least cost to themselves, get rich if possible...), they just hadn’t yet developed very sophisticated ways of going about it. Mauss demonstrated that in fact, such economies were really “gift economies.” They were not based on calculation, but on a refusal to calculate; they were rooted in an ethical system which consciously rejected most of what we would consider the basic principles of economics. It was not that they had not yet learned to seek profit through the most efficient means. They would have found the very premise that the point of an economic transaction—at least, one with someone who was not your enemy—was to seek the greatest profit deeply offensive.”

6. “Money is a thus a unit of measure that provides a means of assessing the value of goods, but also one that operates as such only if it stays in constant motion. To enter in monetary transactions in order to obtain even more money...would be, according to Ghazali, the equivalent of kidnapping a postman. Whereas Ghazali speaks only of gold and silver, what he describes money as symbol, as abstract measure, having no qualities of its own, whose value is only maintained by constant motion-is something that would never have occurred to anyone were it not in an age when it was perfectly normal for money to be employed in purely virtual form.”

7. “Anarchistic societies are no more unaware of human capacities for greed or vainglory than modern Americans are unaware of human capacities for envy, gluttony, or sloth; they would just find them equally unappealing as the basis for their civilization. In fact, they see these phenomena as moral dangers so dire they end up organizing much of their social life around containing them.”

8. “Still, I think it would be a mistake to see the invisible violence and terror as simply a working out of the “internal contradictions” created by those forms of inequality. One could, perhaps, make the case that most real, tangible violence is. At least, it is a somewhat notorious thing that, in societies where the only notable inequalities are based in gender, the only murders one is likely to observe are men killing each other over women. Similarly, it does seem to be the case, generally speaking, that the more pronounced the differences between male and female roles in a society, the more physically violent it tends to be. But this hardly means that if all inequalities vanished, then everything, even the imagination, would become placid and untroubled. To some degree, I suspect all this turbulence stems from the very nature of the human condition. There would appear to be no society which does not see human life as fundamentally a problem. However much they might differ on what they deem the problem to be, at the very least, the existence of work, sex, and reproduction are seen as fraught with all sorts of quandaries; human desires are always fickle; and then there’s the fact that we’re all going to die. So there’s a lot to be troubled by. None of these dilemmas are going to vanish if we eliminate structural inequalities (much though I think this would radically improve things in just about every other way). Indeed, the fantasy that it might, that the human condition, desire, mortality, can all be somehow resolved seems to be an especially dangerous one, an image of utopia which always seems to lurk somewhere behind the pretentions of Power and the state. Instead, as I’ve suggested, the spectral violence seems to emerge from the very tensions inherent in the project of maintaining an egalitarian society.”